Have you ever played a game that single-handedly changed the course of development? If not, then now you can. Welcome to our Viking Runecraft slot review.

We present one of the most important games to ever be made for online casinos, Viking Runecraft by Play’n GO.

These are the feature stats: 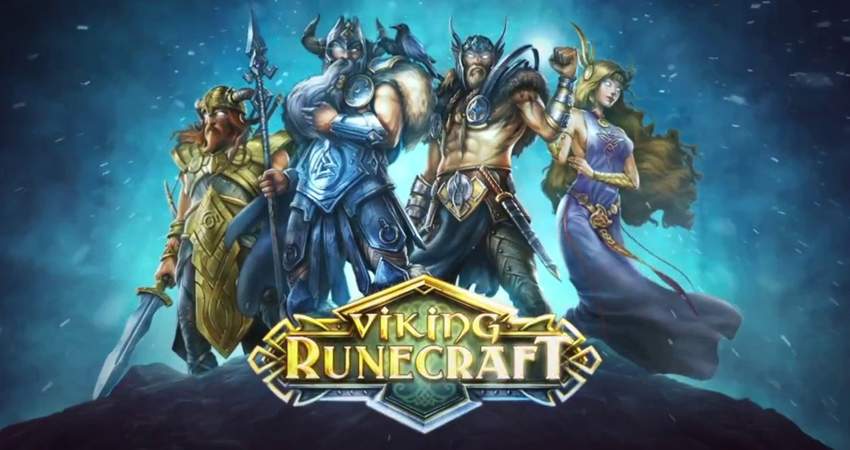 Are you one for praying to the gods? If not, you might want to start. All hail, Viking Runecraft, Gods of the North!

Making its way into our list of free slot games is perhaps one of the most important slot machine games to have been created.

The Viking Runecraft slot stands side by side with other historic titles like Book of Ra, Max Quest: Wrath of Ra, and Mega Moolah. These are iconic games that changed entirely the idea, and design of slot gaming. Viking Runecraft is the most recent, and its impact on the market was like a gift from the heavens.

Released in 2018, there was nothing like this circulating in the industry. It broke all rules, and concepts of what a slot game is and how it should look. This right here, typifies Play’n GO, the developer behind the Viking Runecraft game. Play’n GO are by no means prolific developers, but such is their outlandish genius, that they maintain a course of importance throughout the online world.

You will find their games being used by scores of casinos, but there are only a hundred-odd in existence. Compared to other developers with 500+ games in their portfolio, Play’n GO has been one to take time and care over their work.

Other titles made by Play’n GO since Viking Runecraft have included the Rich Wilde series including Amulet of Dead and the popular Book of Dead titles. Other games included Diamonds of the Realm, Alice Cooper and the Tome of Madness (official), Moon Princess, and Takes of Asgard: Loki’s Fortune.

Before Viking Runecraft, the games being produced were not as dynamic, it wasn't their finest hour and a change in direction and vision was needed. Slots followed a generic structure and would typically consist of 5 reels with 3 rows, perhaps 10 to 25 paylines, the game would have a bonus round and a fixed jackpot.

Play’n GO saw the formula, placed it into a suitcase, set fire to it, and from a single-engine aircraft flying at 35,000 feet, threw the chard remains into the Mediterranean Sea.

They were having none of it!

💲 How to Play Viking Runecraft for Real Money

Viking Runecraft landed inside of online casinos with a god-like gaming layout, never seen before. Nothing came close to this. The first 7 x 7 grid to be seen made players fearful, elated, confused, joyful. People did not know how to process the fact they were faced with a slot machine that looked nothing like a slot machine.

Not only were players faced with a new generation of gaming, but this titan of a slot also held gaming levels. Let’s repeat that… Gaming Levels! Slots do not have levels, they spin, and that is it; they have one level if any. This is only the beginning of a long explanation of what Viking Runecraft brings to a casino’s audience.

So, let us start with the basics.

To play Viking Runecraft, the costs start from 10 cents a play, up to $100. There are no traditional paylines and this game works by rewarding cluster symbols.

If the game wasn’t complicated enough already for players experiencing this for the first time, the slot also came with a High Volatility setting. This makes winning slightly trickier than a Medium or Low Volatility game. However, the RTP at 96% provides an average form of return when played.

Those are the basics, now let us try to explain what the heck is going on with the rest of the features.

There are four levels, each represented by a God. Each god has their own pattern, a pattern that must be cleared from the grid before you can progress onto the next level. The gods are Thor, Odin, Freya, and Heimdall. Gods will appear during games to inflict their powers upon the game to help create greater wins.

🕹️ How to Demo Viking Runecraft

Now, there is a lot to take in, which is why playing the game in demo mode first is a very wise decision. Our official demo slot will allow you to play the game as it would perform if played for real money.

Use the demo to understand the rules of play, become familiar with the progression stages. The demo slot allows you to test the value of the game, because of its High Volatility status, you may not like that wins are less frequent, despite them being more profitable when they do drop.

This is primarily why we provide demo games, so players can decide on their interests for free and without risks, rather than having to learn the expensive way.

This colossus of a game features plenty that will aid you in trying to win real money. Again, there are lots to discuss, from God powers to the Charge of Destruction.

This game is all-out epic, and still, many years later, it sets a standard that many games have tried to emulate since.

Before we go into the Viking Runecraft free spins round, let us first take a look at the other bonus features that propagate this marvel. We begin with the God Powers that can trigger during any game round. These are the powers bestowed during the base game. They can influence wins up to 5000x your wager.

Other bonus features include:

Rune Stones: Wins that come from one of the five Rune Stones that help to clear the God Pattern triggers the Rune of Valhalla bonus game. The Wheel of Valhalla holds the symbols of the Rune Stones, each one has a value or multiplier that can be won when spinning the wheel.

Charge of Destruction: This is a bonus round that has offers one of four features:To the side of the game, on the left, you have a shield with Nordic lettering around the rim. This charges up while consecutive wins are made. Once fully charged having won from 20 game symbols you will unleash one of the following:

Ragnarök: Seen as the “free spins” round. This is a free round that whenever no wins can be achieved within the free round, a Charge of Destruction is triggered. Each kind of destruction will be triggered once. This is the Ragnarök feature, a full onslaught of destruction. All winning symbols are also increased by the multiplier charge, which can boost wins up to 15x.

These are the symbols spotted when you play Viking Runecraft, along with the potential winnings they can yield.

⚡ Jackpot and How to Win

However, there is the potential to win $500,000 by playing the max spins value of $100 and landing the Ragnarök and multiplier charge feature and bonus round.

Can you experience this slot as a Viking Runecraft mobile game? Yes!

If you wish to experience the game without restrictions to where you are, then turn on your mobile and fire up the Nordic god game. You can enjoy it either as a free demo or a real money game.

You can access Viking Runecraft from any iOS or Android smartphone device.

📂 Can I Play Viking Runecraft from Casino Apps?

Yes, you can play Viking Runecraft via any casino app, providing the game is supplied by the casino.

If you download any app online, make sure you only do so from links provided by the casino. Apps should be free, so never pay for them.

You can find some casino apps held at Apple App Store and Google Play.

✔️ How to Play Viking Runecraft from Mobile

Not all of Canada’s casinos come with an app service. If this is the case, then you can upload the website of the casino via your phone’s browser. You can still access the slot by entering the menu and typing Viking Runecraft into the search.

Playing via your browser is no different from how games are played via an app. You won’t need any additional software if using your browser. Thanks to HTML 5 software, websites are now able to stream their games without those extra software tools.

With access to Viking Runecraft free play, you take no risks, and playing is fun and free. If you plan to play with real money to win real money, then it’s entirely different.

Casinos are now helping those that succumbed to risk-taking all too easily by providing account limits. Players can limit deposits, what they bet, and what they can lose. Limits can be imposed to restrict time spent playing and can help to exclude players wanting a break from gambling.

All casinos listed at Casimoose provide this Responsible Gambling services. The feature is optional and can be changed or removed upon request once implemented.

In all honesty, so much is going on that you might just want to kick back, whack the Autoplay on, and hope for the best; as you pretend to fully understand what is going on.

Despite its complexities, you will get used to the gameplay over time. It is one of the best Play’n GO games there are, and it’s not hard to see how this game rocked the industry.

✅ Win up to half a million Canadian dollars

If you want to play the Viking Runecraft casino game for real money, then we advise you to head to Wheelz Casino where you can enjoy this slot and a $300 welcome bonus with 100 free spins. Note that these free spins cannot be used on Viking Runecraft (T&Cs apply).

Head to our review of Wheelz Casino and register via Casimoose to claim your great bonus offer.

Other Games in the Viking Runecraft Series

A follow-up to Viking Runecraft was made by Play’n GO and it’s a little different. Viking Runecraft Bingo was released in 2020. It comes with an RTP of 96.71% and a Very High Volatility setting.

The max jackpot is $500,000, and you can play this game for free right here! It is packed with bonus games, extra ball features, and a Ragnarök game feature.

What are the Viking Runecraft Slot Features?

The gaming features of Viking Runecraft by Play’n GO:

Can I Play Viking Runecraft Free?

Yes. The game can be accessed for free in its demo mode right here at Casimoose. But, if you want to play a real money version for free, then you need to register with a casino and access bonus spins and cash credit. Always read the T&Cs of a bonus to know what games are eligible.

Yes. The jackpot here can payout up to $500,000. You’ll need to join a casino for that, as this demo game featured here does not payout real dollars.

What Is the Best Online Casino Canada to Play Viking Runecraft?

Right now, the best Canadian casino to join and play Viking Runecraft in is Wheelz Casino. They have this slot and the Viking Runecraft Bingo game. You can enjoy more titles from Play’n GO, plus they are currently offering new players a welcome bonus of $300 and 100 free spins (T&Cs apply).